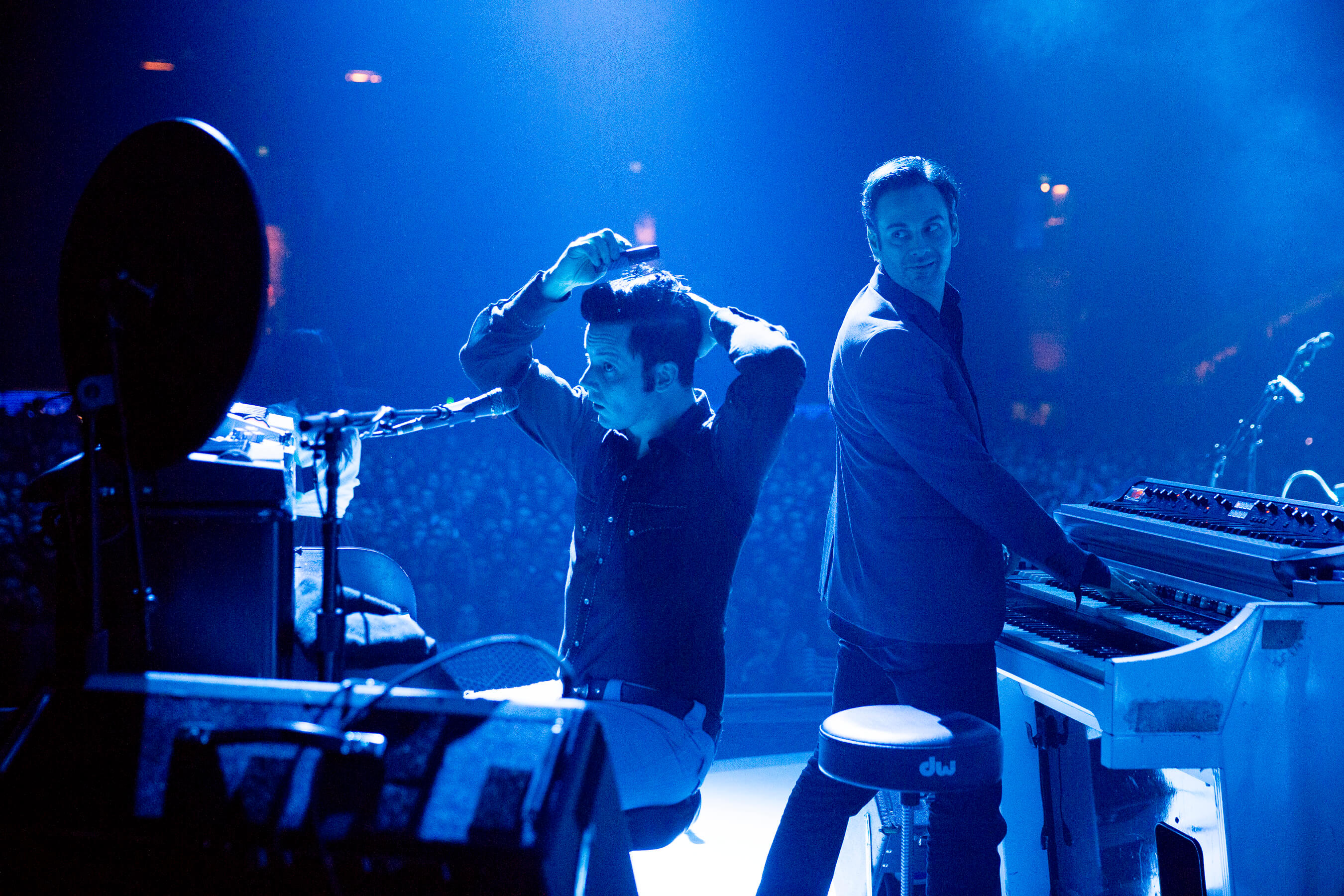 I would like to give you a spoiler about what will you read a little later. Yes, with just one word: Hypnotizing!

On the 7th of November, Jack White, whose concert has brought a breath of fresh air and inspiration to my life without doubt, has provided my boring autumn with joy and energy.

Of course it is good to mention about it in advance.

We are really excited on the 7th of November morning. Before putting on the clothes that we have barely decided upon until 2 a.m., we have the questions like what time we will meet and how we arrive in.

We are hurrying up and setting off. I and my concert friends, who are relatively different from each other and a band together that we look like Powerpuff Girls. Because of the fact that we are located in a far place and we have the aims of getting the place for downstage, our journey starts at around 14:00.

Fortunately it starts because the bus is relatively slow and crowded. This doesn’t stop us and we are getting closer to VW Arena. But it is not easy for us to arrive there. While we are walking with the hope of reaching Volkswagen Arena in a long road, I defat a couple that I have seen them as a rival by getting ahead of them. However, the road on which I run doesn’t end and my rivals that are sweet tourists and left behind ask how to arrive at the concert place. Of course, it comes from my heart and I get sad.

After the walk that seems not to end, we arrive at Volkswagen Arena, whose old name is Black Box. There are 2-3 people ahead of us and this isn’t a problem for us. We are eating our snacks and spending time with the sweet cats that are walking around.

The concert queue that we enter at 4 o’clock extends at 5 o’clock and the end of the queue doesn’t appear. While I wait in the queue at that beautiful night, I talk about every issue of the day and watch the big crowd that is coming to the concert place. Everybody takes reference of The White Stripes period of Jack White as if it were arranged. There is a big TWS crowd from hairstyles of that period to red-black clothes that they wear. It is not certain for me to be happy or sad about this whether we are faced with Seven Nation Army fans.

The wait that seems to last forever ends fortunately and we give our tickets to the officer (I haven’t understood that 18 year-old age limit all my life). Our wristbands are given and I start to run to the concert hall. Then, victory! Finally, we are in front of the stage and opposite the microphone together with my friend.

I watch the crowd after I am sure that our place is safe. VW Arena is a wonderful place. Finally, we have a complete concert hall with its beautiful atmosphere and sound system!

Radyo Eksen’s Dj does a really good job in the concert hall from 6 to 8 o’clock. As we are trapped in front of the stage, we can’t move and we are surrounded by other people. In other words, there are hundreds of fans that sit cross-legged behind us.

Umut Adan takes the stage at 20:00. As he is not a person that I have listened before and I desperately want to reach Jack as soon as possible, my prejudices against him start to decrease thanks to their performance. Their harmony, communication with the spectators and their positive energy are really great. Though I can’t sing their songs, their energy is enough for me.

Towards 9 o’clock, Umut Adan comes off the stage by saying “have a midas touch” and the giant curtain in front of us is drawn and the fogger operates. All the concert hall becomes blue and not seeing what there is behind the curtain prolongs the time.

I share the idea that Jack White will use shadow stripper issues and this idea isn’t accepted as negative.

Finally a man comes and says the most reasonable words that I have ever heard. This becomes a very special moment for the people that experience it and it emphasize the point that it is meaningless to watch this behind a phone screen (the entire concert hall accepts these words. All we have taken pictures but 1 or 2 is enough for us). 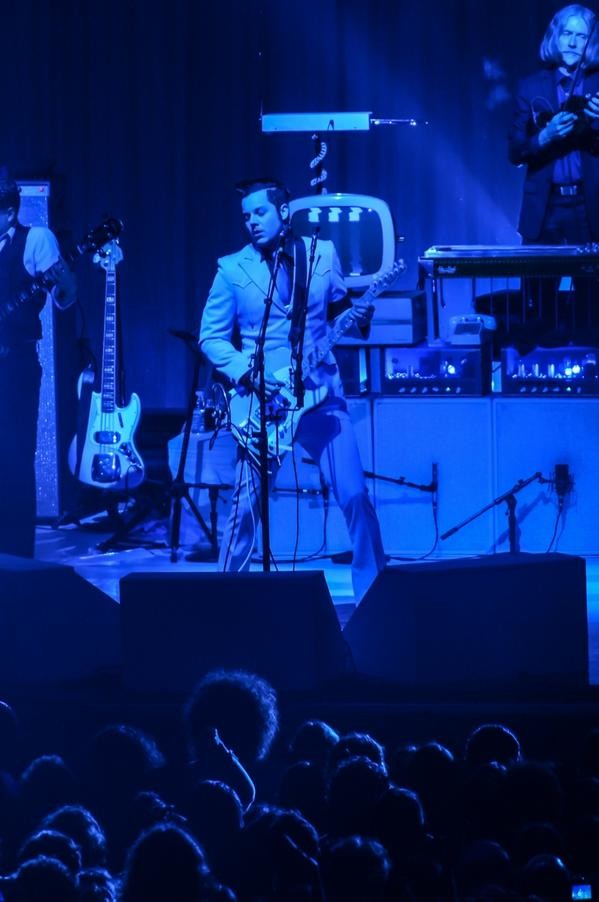 Finally the thing that we want happens. You can believe that I am getting excited when I think about that moment.

Jack White is in front of us with his beautiful appearance. Oh my god! Does this man have such a beauty?

Before talking about the details, the first point that I am impressed is the stage. Blue stage is both energetic and peaceful. We may have missed the reddest or blackest periods of Jack White (those days will come again) but it is very wonderful that we have caught his bluest period. Finally, Jack starts his big concert.

We are feeling the moment with High Ball Stepper. I am in the mood of climbing the fences in front of me. Jack plays and we whistle.

This means nothing. When I hear Dead Leaves and the Dirty Ground, the scream that I cry is enough for my ears to ring. This song is very special for me and the reason why I get crazy for Jack White is this song. Also, this is the reason that I know The White Stripes and Jack White.

Fortunately the entire concert hall has the same feeling and we are losing our consciousness with a song that has one of the best riffs of the world. Listening to this song that I discover at a time when I feel very lonely with thousands of people makes me feel more. We feel that the concert hall shakes when we hear Lazaretto. During the song, our heads, arms and all the other things move not related to the time and place. In fact, this song is lively and very different. 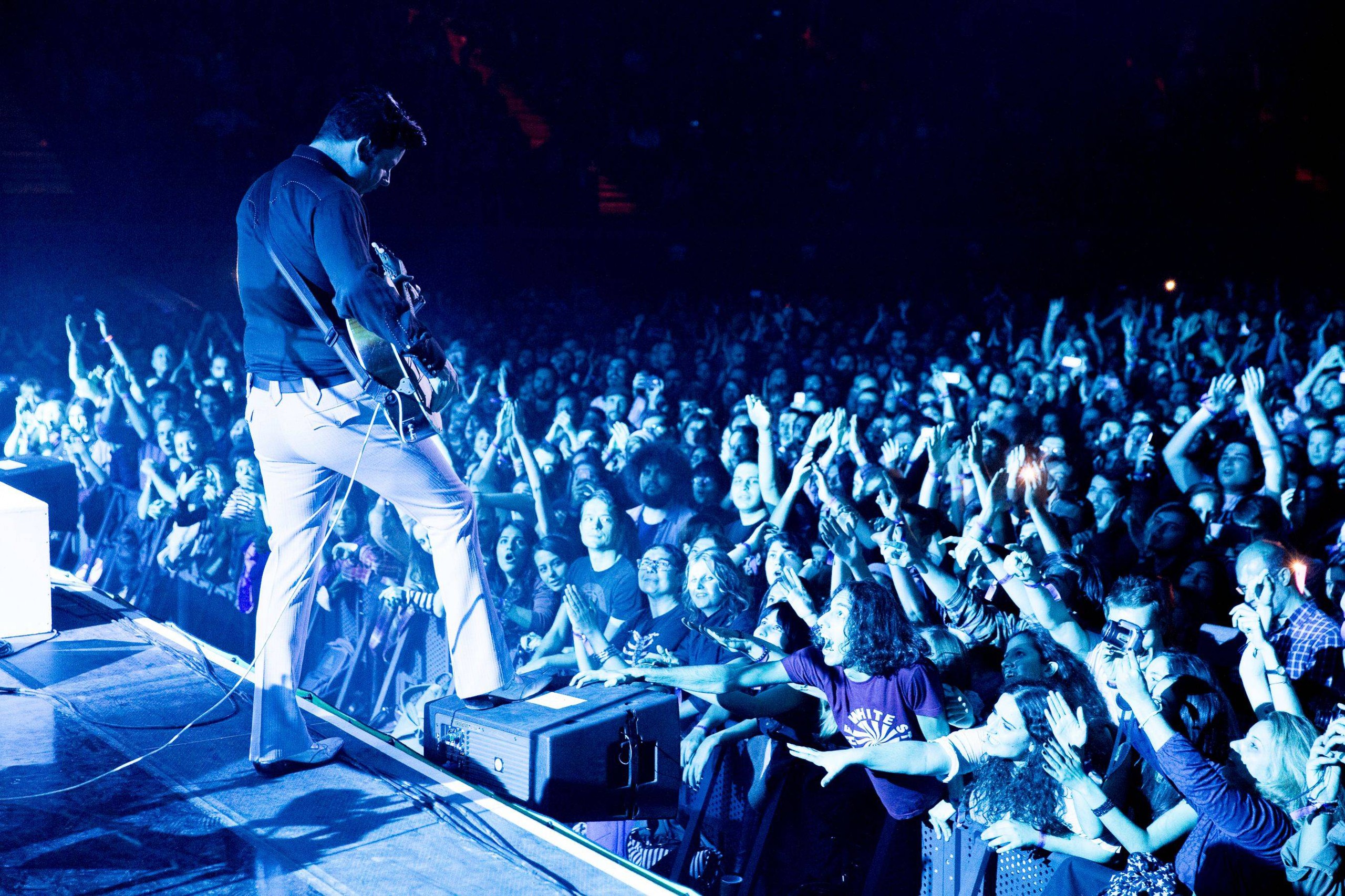 We hark back with Hotel Yorba and continue with Temporary Ground. Here it is important to state that especially men fall in love with Lillie Mae Rische. She fits the stage well with her beautiful appearance and her talent. 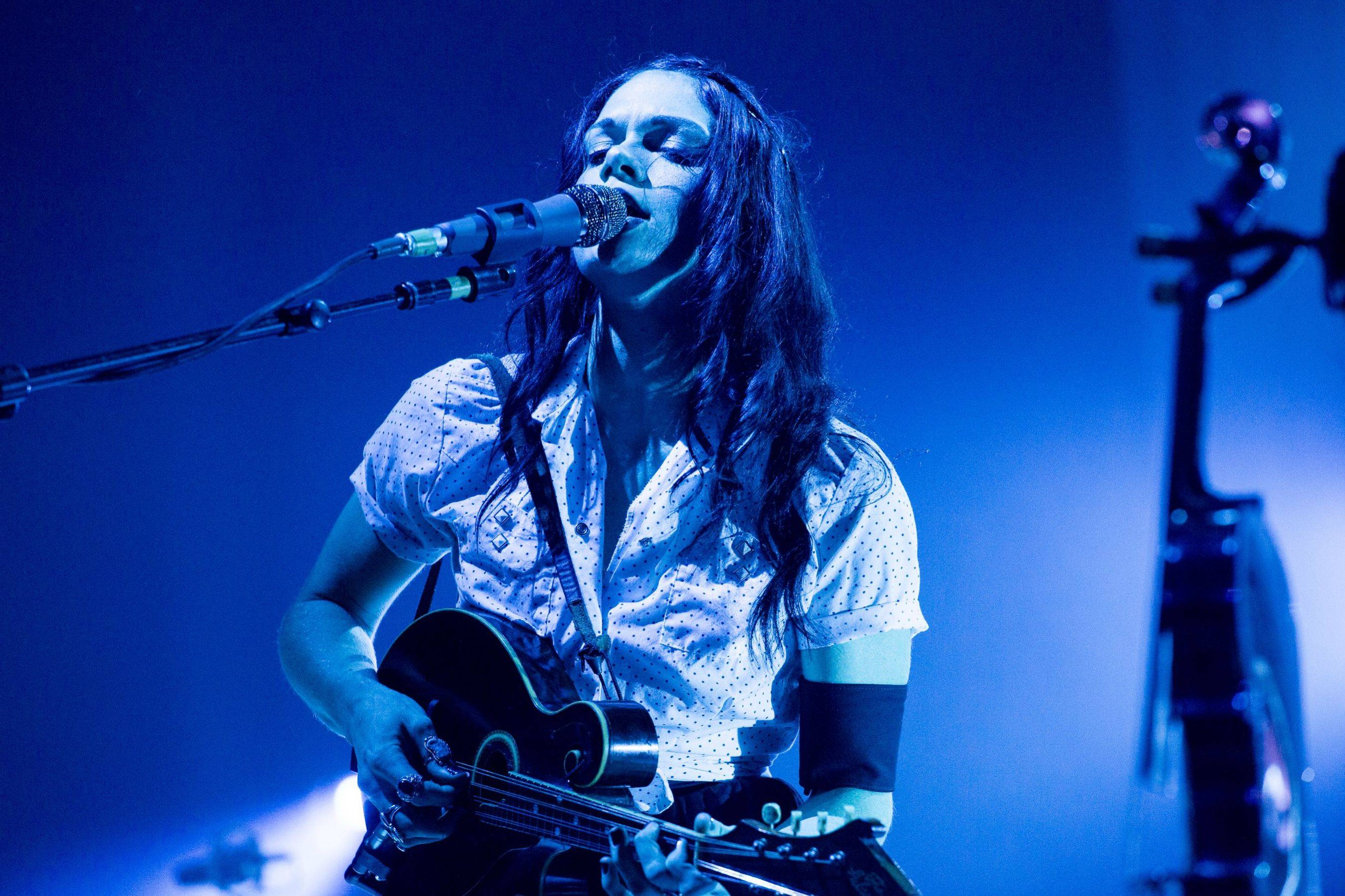 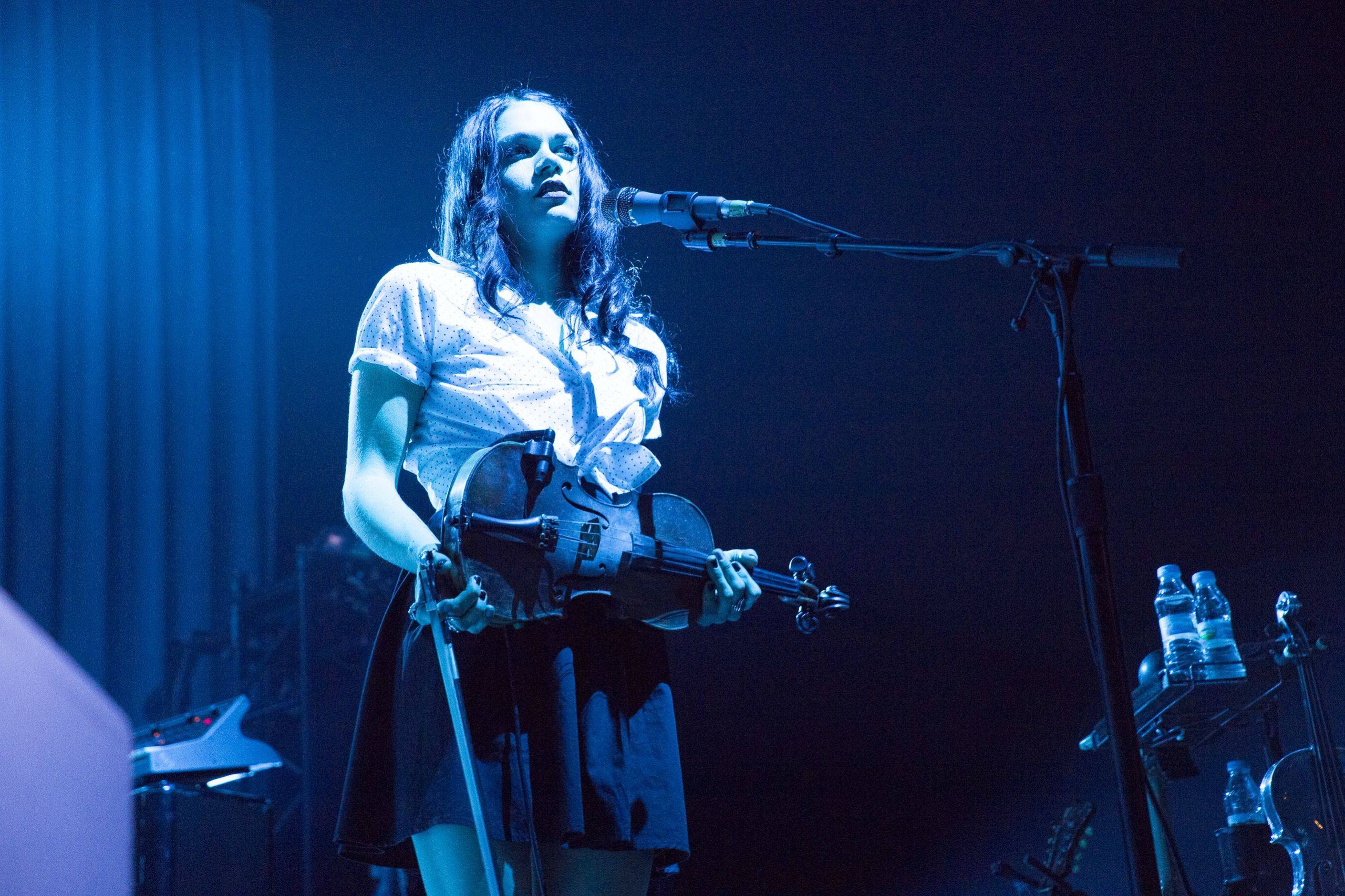 After we repeat the trance mood with Alone In My Home, another rising point of the crows is experienced with Would You Fight For My Love? We sing along the song that everybody loves the most. We don’t have the opportunity to thing about the lyrics. Therefore, I have to bracket again this time for Jack!

Jack White is one of the people that I voluntarily listen, love their appearances and find sweet. Of course it is different to see him on the stage. There are some fears about it turns out to be a bad concert.

But the thing that I fear most doesn’t happen. In terms appearance, he is tall and he has a beautiful face and dimples. He doesn’t wear his age well and this is very surprising. During the concert, we compare him to a teddy bear and we plan to bring him to home. Moreover, he is very lively, positive and sincere. The most important reason why the entire concert hall watches with a smile is this. 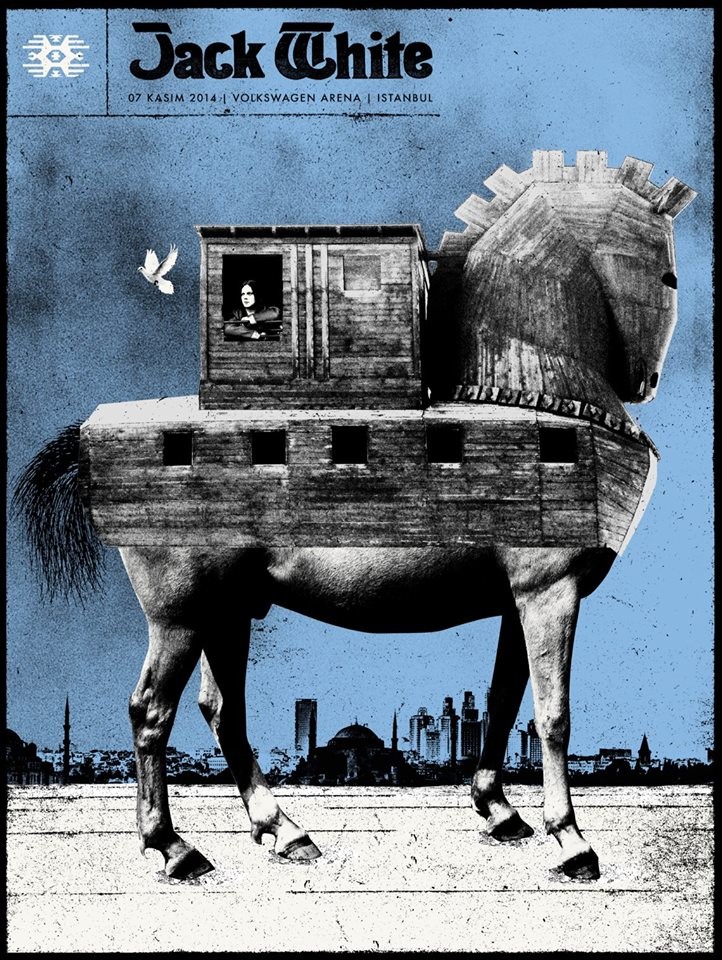 The poster of the concert has been designed as a Troy Horse in which Jack White is placed. It is an original and beautiful poster but at the same time it is meaningful. Jack that comes out of the horse is also very surprising. I can’t imagine it so good.

When he starts to comb his hair, the entire concert hall sighs. When he takes of his jacket or tie, we start to applause. Therefore, we answer the question, Would You Fight For My Love?, as “yes” in a certain way.

We wave our hair by dancing with Sixteen Saltines. Our amazements reach to the peak point with Missing Peaces, Love Interruption and Weep Themselves To Sleep songs. 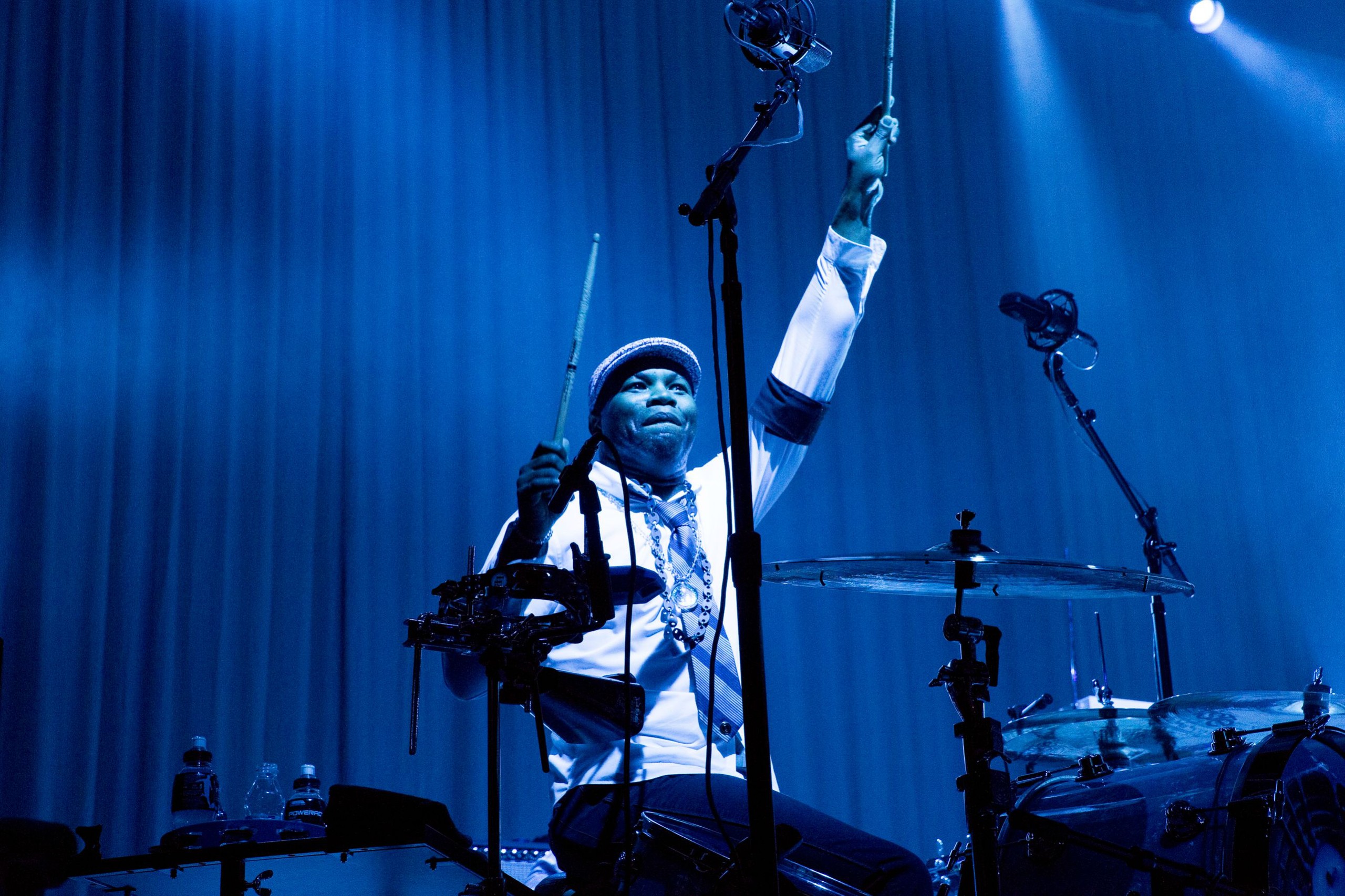 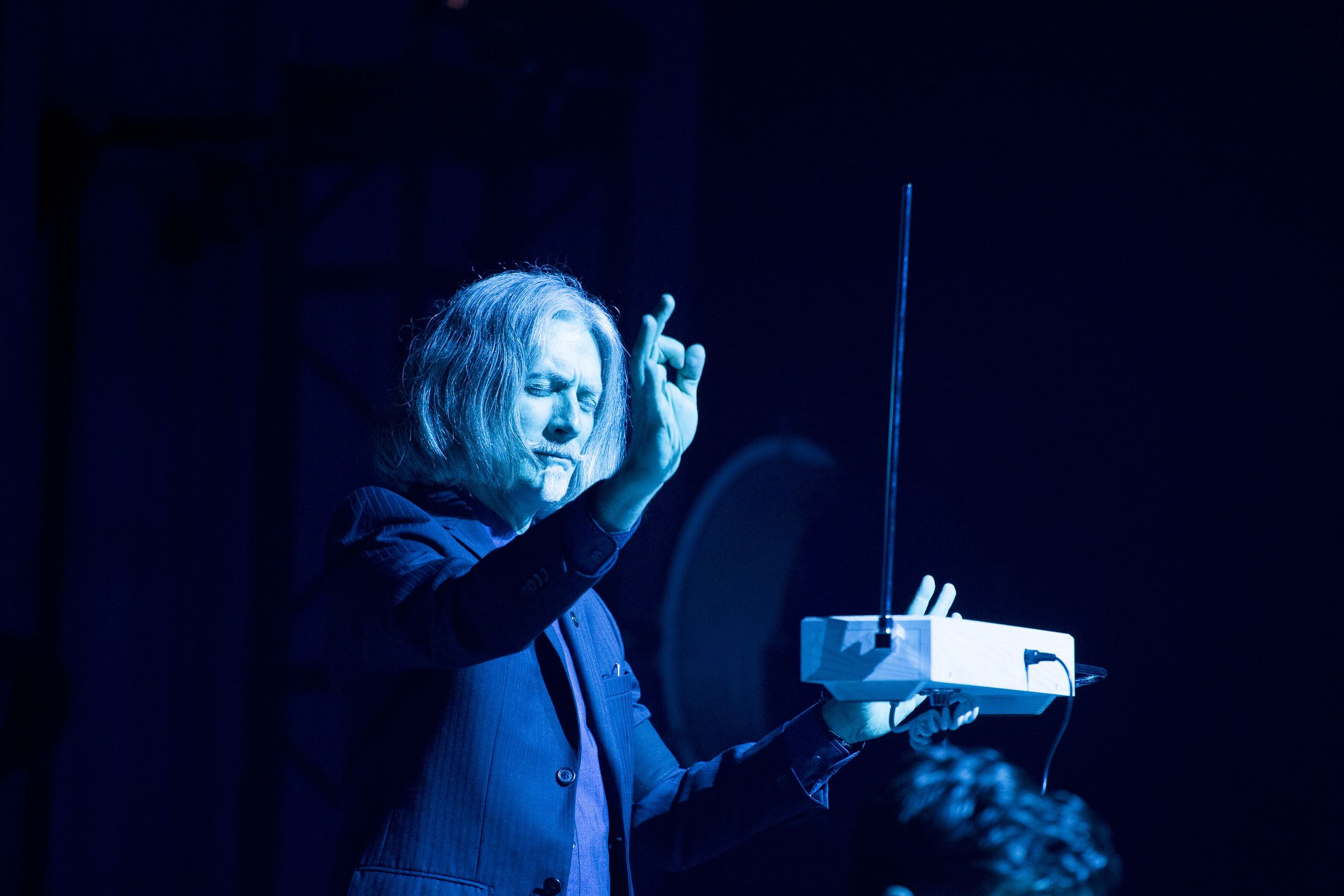 This energy is with everybody on the stage. Everybody has a harmony and is great! As everybody has a communication with the spectators, it is impossible for us to not to be impressed. Fats Kaplin that stands behind is the example of being cool on the stage. Daru Jones, who is playing the drum, makes our mouth wide open. His performance is breathtaking and his energy and smiling face impress us.

Dean Ferita, who experiences that performance with Jack White, is the third person that I bracket in this article. As girls, he becomes our next favorite in this concert. He does an amazing performance! 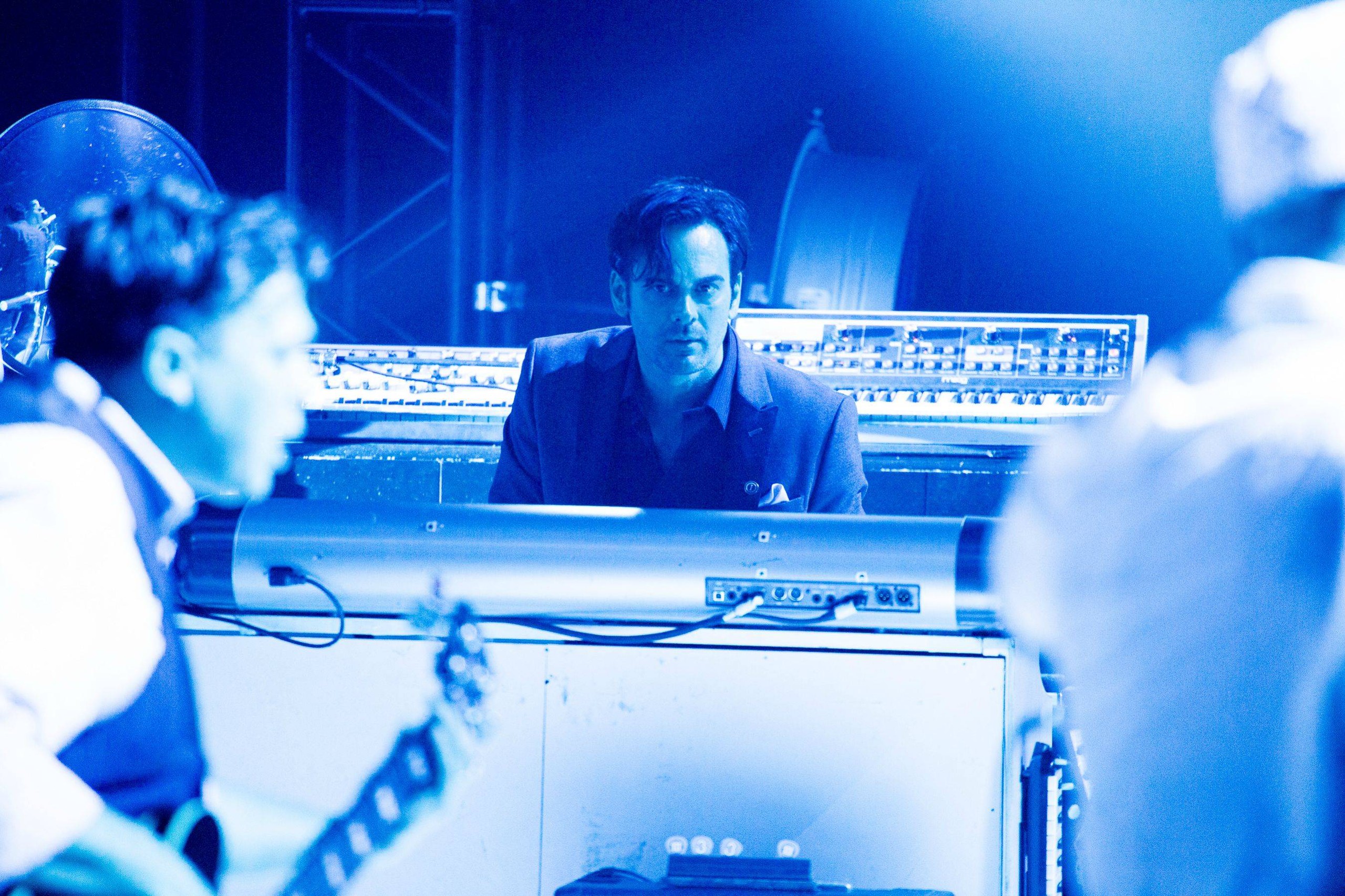 The concert has another meaning as they perform first after they lose Isaiah Ikey Owens. They emphasize the mourning for him with black bands on their arms. This concert is the first of their European concerts and this has made it be important. Judging from this concert, they have started their Europe tour in a wonderful way.

After that Icky Thump starts and we take the revenge of The White Stripes period that we miss and we lose ourselves. We beat the ground and jump while we are singing “Who’s usin’ who? What should we do? Well you can’t be a pimp and a prostitute too”sentences.

As we maintain eye contact and I watch him getting my face between my arms without jumping and singing and as he responds to the kisses that we blow, we get crazy with a huge amazement. 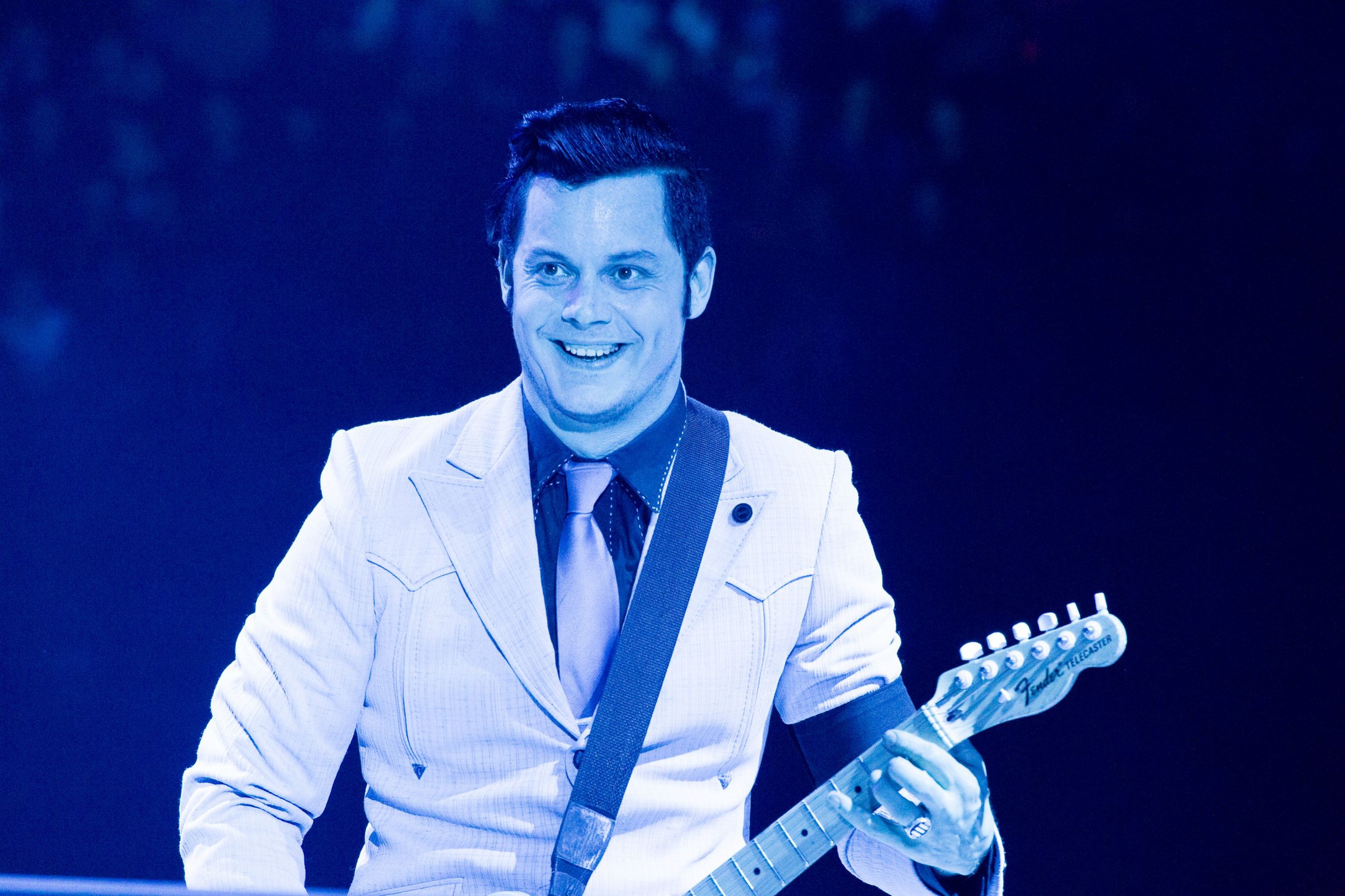 I get in to the trance mood as I have got the guitar pick. I put it into my bad after I accept it as blessed.

After our happiness is above the airwith We’re Going to Be Friends and Ball and Biscuit, there comes the song that we are waiting for to sing hale and hearty. Seven Nation Army!

The energy of such an international song is big of course. After the performance that flawless words like unbelievable, awesome and great define, Jack leaves his guitar and the whole team salutes the spectators. We applause with our great strength with our tortured hands.

Everybody doesn’t leave for a while and we are all shocked. An after party starts when we are about to leave but we don’t drop by as we can’t tolerate it after such an awesome concert.

At this point a few sentences should be said about this organization. The organization is greater than I expect like the concert. As I mention above, there should be more places in Turkey like Volkswagen Arena. We don’t experience any problems when enter and leave the concert. The problem level is certainly zero with their clean restrooms, spacious place and great officers. The closeness of downstage to the stage is awesome! Not coming across with a security guard disintegrating the crowd in front of the sage is another detail. In short, the organization is satisfying. 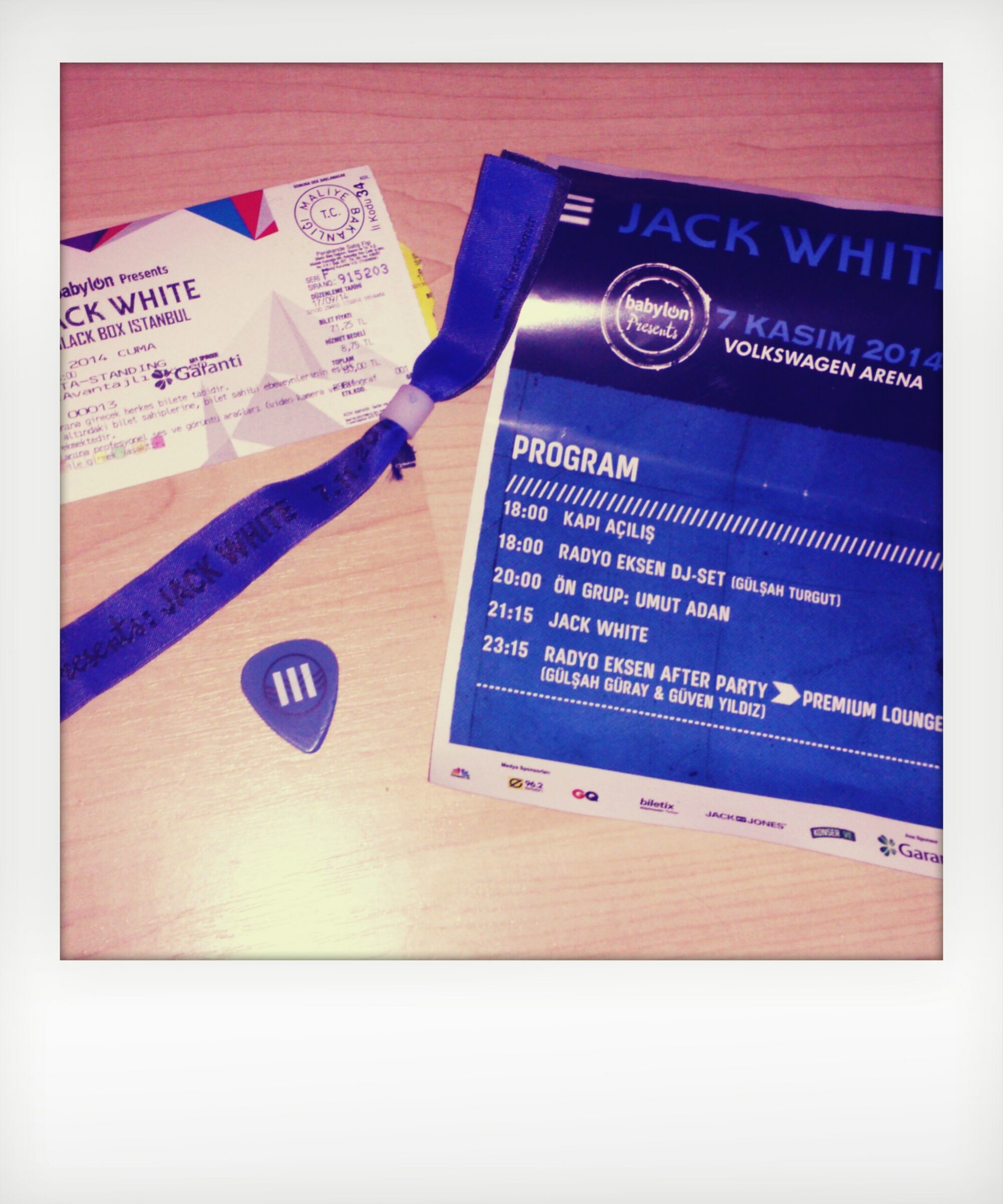 When we leave the hall without a problem and scream that “when they come again, I watch!”, we feel the shock of going back to the real world. We go to our cars with the screams of Seven Nation Army.

This blue and hypnotizing night is one of the most important nights that leave it mark on my life. Inspiring and refreshing! I know that I follow you Jack White! Come again and we watch it one more time! Even we can come to you!

As you say at the end of the concert: “God Bless You”…

NOTE: Many thanks to Mesut and Gozde for photos and videos. They are the people that make this concert beautiful.

See you in the next concert! 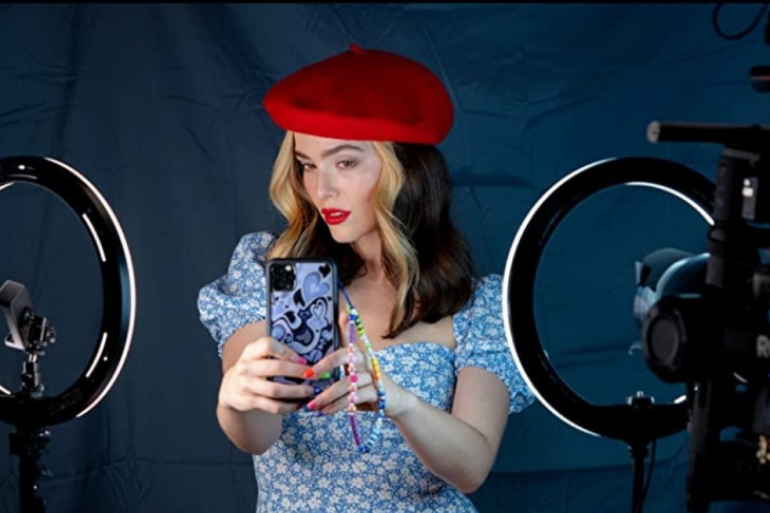 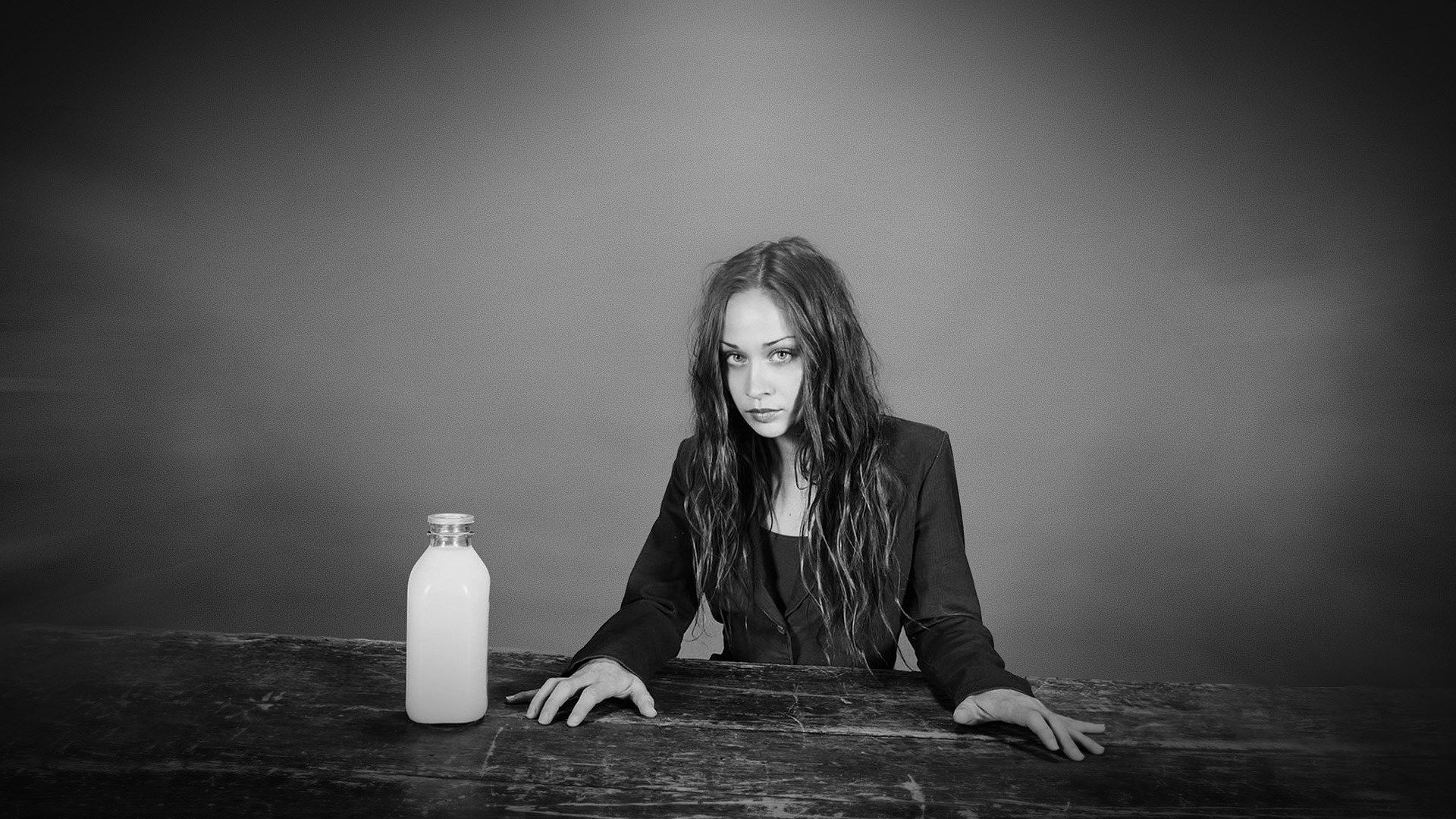