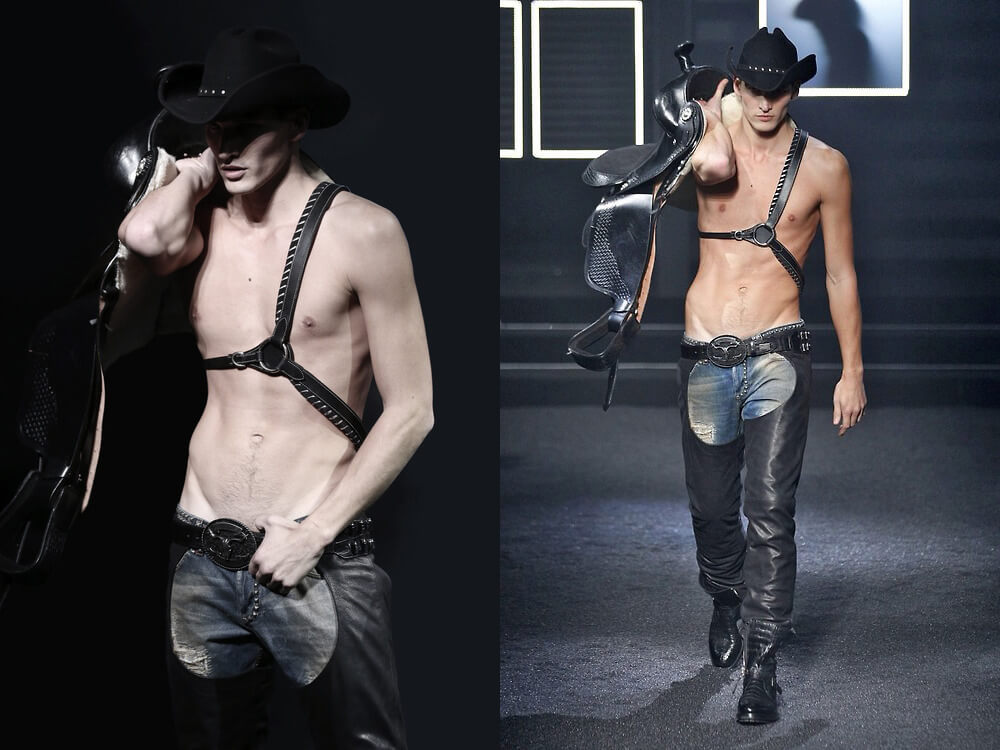 An interview with an iconic model of new generation: Dominik Bauer!

Here is an iconic model of new generation: Dominik Bauer!

If you are from that time when David Gandy and Noah Mills were on the march, this name might sound fresh to you. Princes of our days has become the kings of today, Dominik is definitely one of the best choices for replacing a prince that became a king. 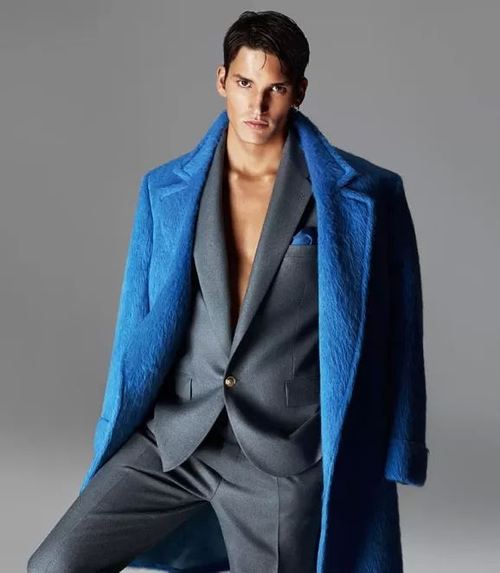 The cowboy display of Dominik in Philipp Plein’s Autumn/Winter show, who has a great control on his special features and proves that by looking like a different man in every shot, has come into a different state in everyone’s mind and mine of course. That amazing cowboy, who freezes time when he starts walking on the platform and shows that he is like noone else, currently plays the role of gothic dreams in Givenchy campaigns.
He takes a part in Hot List of Models.com and makes my dream come true by accepting the interview request for Multibabydoll. 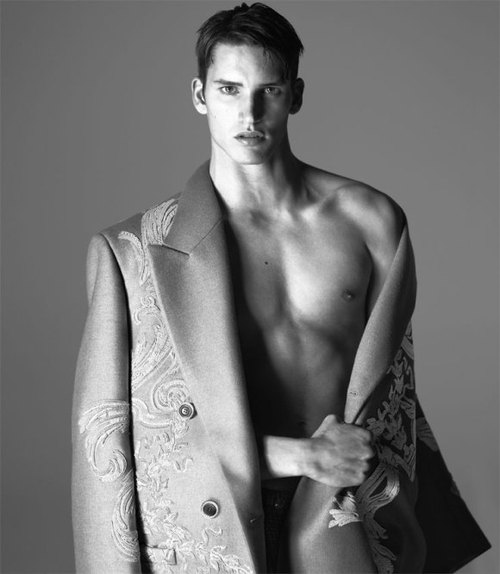 Thank you for accepting Multibabydoll’s interview request! I would like to start with the most cliched question; what’s your story of being a model?
Since I was 14 years old, I was doing shoots just for fun over the years and when I was 17, I decided to send some pictures to an Agency. From this point I was just modeling next to school and university for three or four years. Then I decided there must be something more exciting then going to university every day. I was studying information science and speaking technology which wasn’t too much fun for me. So I quit university in my third semester and switched to a whole new agency, which was NoToys in Düsseldorf. I made NoToys to my mother-agency, as well because its not very far from where I live, went to the shows in Milan in January 2013, they placed me everywhere in the world, and now one year later I find myself on this point where I am at now.

Do you remember the moment when you were on the platform for the first time? How can you describe that feeling?

The Calvin Klein Show last year in January was kind of the first very big show I did, as well because I opened and closed it. When we did the rehearsal my eyes were tearing, because of my contact lenses and the make up, so before the actual show I was very excited and afraid at the same time that my eyes gonna start to tear. But everything went well and it was a very fun show, so I was lucky.

In my opinion, the most impressive moment of your career occured in Philipp Plein FW2014 Show. I believe that you stole a role from every other model in this show. Was that a different show for you too?

The Philipp Plein show was just a little part of 15 days of traveling and work. And shows are mostly just to show your face around in the fashion world. In my opinion its always about collecting good references. Philipp Plein is a very special show though. They always go crazy with the design of the show, which is very great, and I was very thankful that I was allowed to experience that. If I would have to name the most impressive moment I would not even be able to. You just meet a lot of good people around from all over the world and experience new things and a lot of very impressive, interesting, teaching and inspiring moments.

Fashion world sometimes could not be as lovely as it seems. How is your relationship with the other models? Do you have any good friendships or does everyone believe that the others are also the opponents?

Over the years I made so many good friends and the cool thing is you never know at which corner or city you gonna see them the next time. Of course sometimes you hear about jobs which others had and you would love to work for this brand as well for example, but the other male models you meet are all doing the same thing as you. They all travel a lot, they are mostly around your age and they are all going through mostly the same stage in life as you, so its very easy to get along with all of the very, very funny and cool characters. 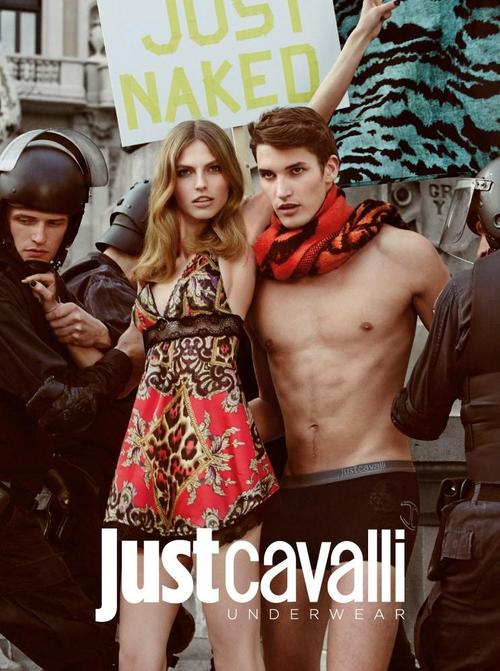 How does your job affect your private life?

It doesn’t … actually. Next to my jobs and travels I always have a few days or even weeks off, so I use this time to write my music, to live my family life with my parents and spend as much time as possible with my siblings and friends. So everything has its order.

I have always thought that Men has more difficulties than woman if being model is in case; but the situation looks different compared to the situation of ten years ago. What do you think about that?

I guess in the female business is way more rivalry and pressure, because there are way more female models in world than male models. I believe as well that they have to watch out for their bodies way more then men. At the male model business we have muscular guys, very tall guys, smaller guys, commercial guys, skinny guys, etc. So there is always a division you find yourself in. Female models have to be very tall, very skinny and need to have very long legs. Even they have to walk in High Heels on the shows and at the castings all the time. So I experienced over the years that women have it way harder, but I heard they are getting paid waaaay more then us, so I think it must be fine. 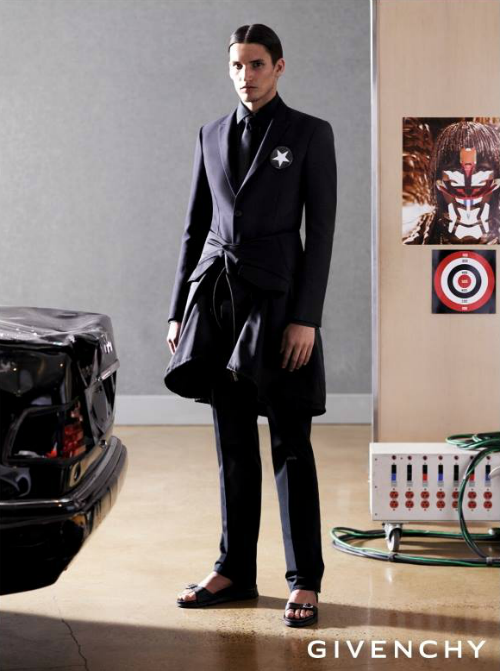 Which show or campaign did you most like being a part of?

Any job is different and amazing in its own way, but when ı have to name something here it is for sure the Givenchy campaign which was shot in Los Angeles in Hollywood. The whole time there was just amazing because of the great team and the pictures turned out to be crazy good. It was as well my first time over there so i was already excited enough. But apart from that ı see any job ı do as a big honor to be part of.

What do your parents and friends think about your job?

My family and friends are supporting me a lot in what I do. I have been doing it for so long now that they are totally used to it. They know that I really love to do what I do. I wrote my parents a long letter when I decided to quit university to start fulltime-modelling, where I wrote about my reasons and plans for the future so that they read carefully and understand why I made this decision. They really understood. And my friends always watch out that I stay the same person I have always been. My homeplace, where they are all at, keeps me grounded and makes me breath and fill up my tank again for the next travels. 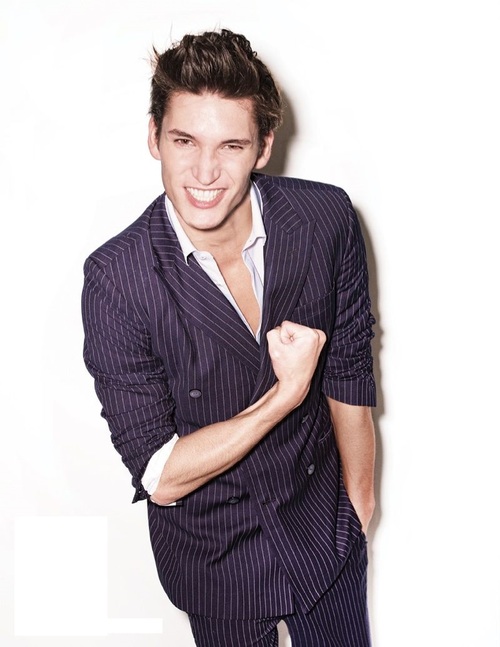 Do you believe that being a model limits your freedom at some points?
It just does in the way that you cannot really plan your time because it is very important to be flexible and available. You can book the vacation for summer with your friends but you never know if you gonna be able to be there. Its cool though, because I think its exciting to never know exactly where you end up or what will happen in the next months.

When you wear a costume which is completely irrelevant to your clothing style, what/who motivates you to keep wearing it?
The designers always put so much work in all those clothes. When you wear something you absolutely don’t like, which happens sometimes, then you just say ‘naaaaaaaah, thats alright!’. It’s our job to present the clothes, so there is nothing to complain about. The Philipp Plein outfit was super special for me as well. I don’t normally walk around with a saddle, chaps and harness around my chest. So you just go for it. 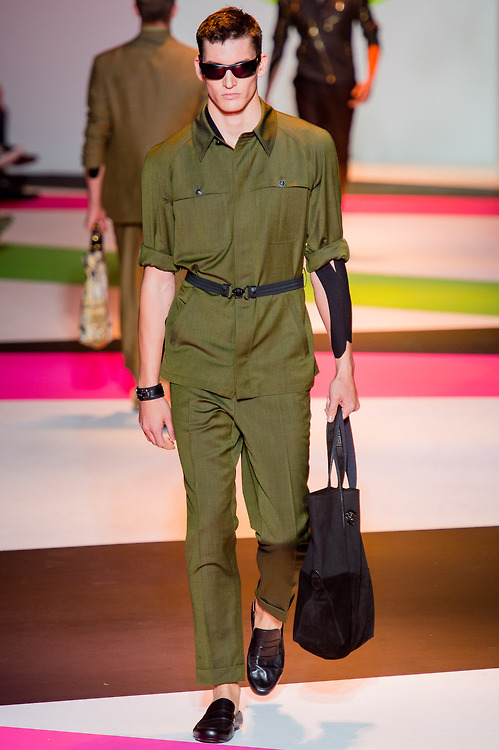 Have you ever wanted to save a costume for yourself?
Oh yeah of course! Sometimes you wear and see very cool stuff but unfortunately you can’t just take it with you. It is very rare that you get clothes from designers or at shoots.

How do you describe your clothing style? Does your job affect your usual life clothing?
I would describe my clothing style as casual and comfortable but as elegant as possible. I don’t like shirts with any writing on it and as well no other bright colours then white. So I love black, brown, olive green, bordeaux red or dark blue. I do this because I hate to think too much about combining. With these colours I can combine anything and they as well fit me the best. 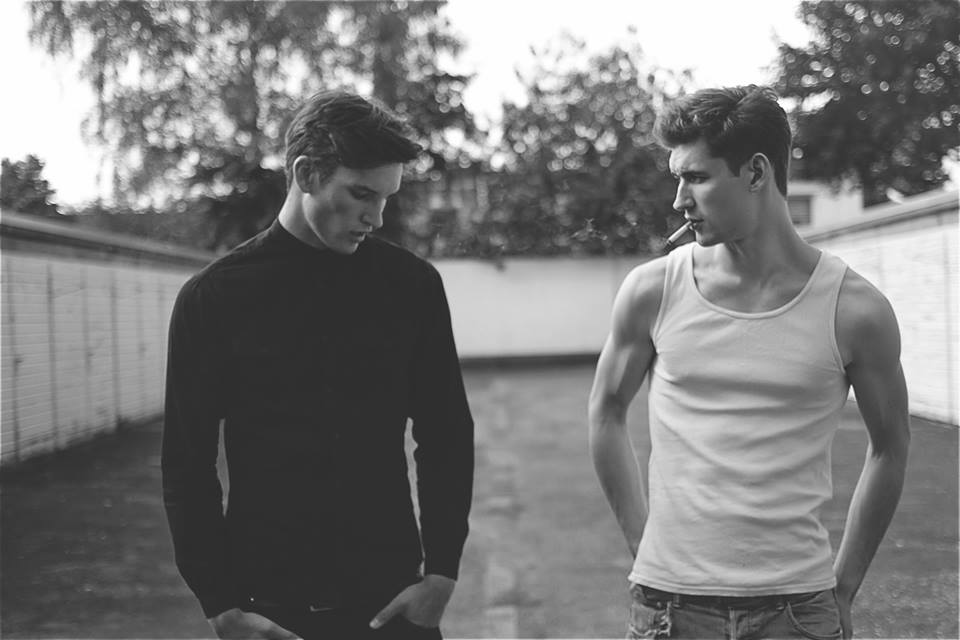 Your job contains so many journeys… I wonder about the songs in your playlist that you listen during your journeys.

I have a program called Spotify where I have so many different playlists on. And I always put new lists together with the songs people show to me all over the world. I have one big playlist where I always add the very, very best songs I really admire. My music taste is very Crossover, I don’t like to focus on one Genre because I want to hear the variety of all music of the world. (Wildfire – Sbtrkt; When I’m Small – Phantogram; Do I Wanna Know? – Arctic Monkeys; Within – Daft Punk; Black Sheep – Gin Wigmore; Dancing Anymore – Is Tropical) 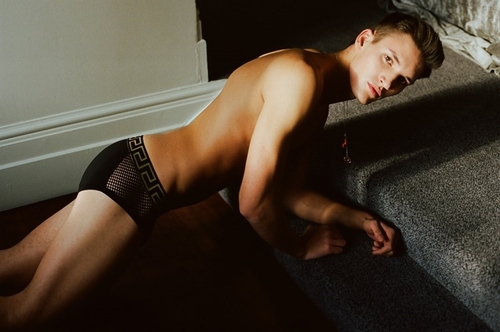 How do you keep fit? Since your job almost depends on your form, is there any moment that you don’t think of it?

My job actually already keeps me fit enough. In summer I do a lot of swimming, riding the bike playing basketball and all this stuff. I really have to admit that I don’t exercise too much in winter, I just walk, walk and walk. That’s my sport in winter. There are a lot of moments where I think about that I probably should do more.

Can you make time for any other things except being a model?
The days I have off between the travels I just use for all the important things in life. Which is playing and writing my music at first sight, as well as being with my friends and family. 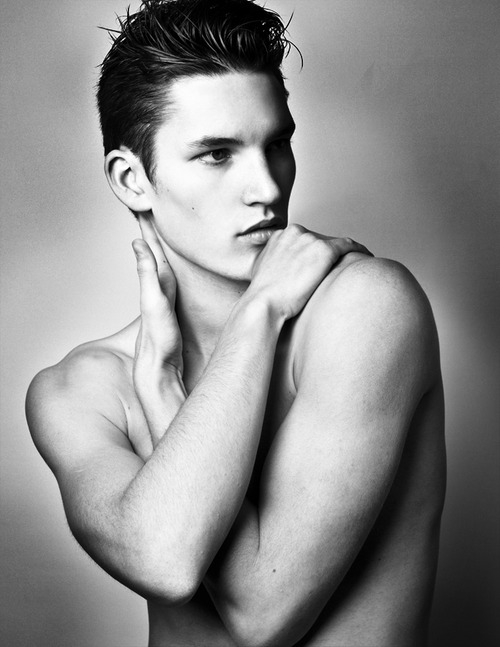 What are your future plans? Are you going to keep being a part of the fashion world?
I am writing music since I was 13 so my dream is to bring my music to the people, but right now I want to see how far I can go with modeling and traveling. I collect inspirations everywhere and just write a lot. So I will see when there will be the right time to show my song-repertoire to some producers.

Can you give us a secret only for this interview’s readers?
I am super super scared of jelly fish. You could call it a jelly-fish-phobia. 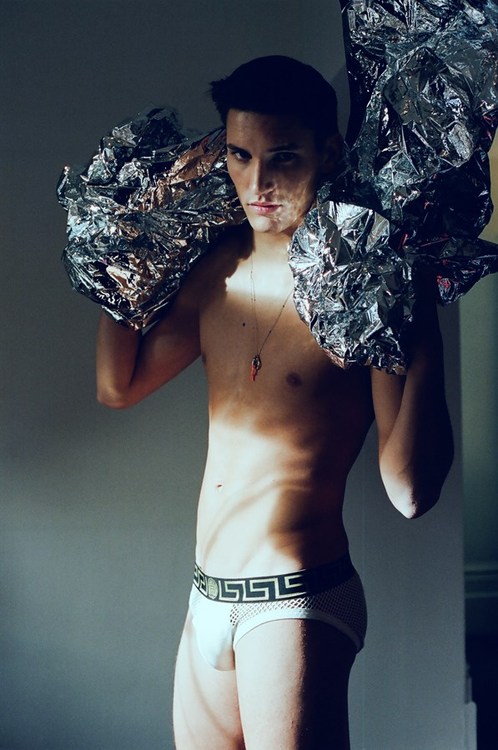 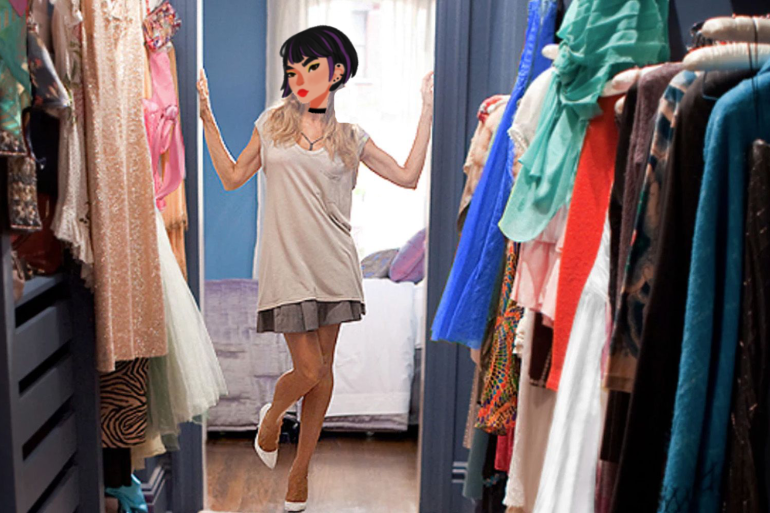 Get Ready With Me: Smokey Makyaj, Mini Sohbet ve Saçmalamalar

KARANLIK VE MELANKOLİYLE GELEN İLHAM: SHE PAST AWAY